Auger or Pintle Chain: Which V-box Hopper Spreader System Is Right For You? 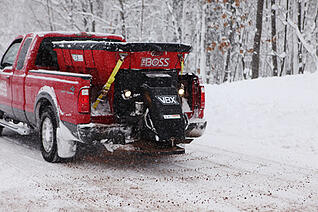 If you’re doing research on electric v-box hopper spreaders, you are learning quickly that the two types of material feed systems available are the auger and pintle chain. If you don’t have a lot of experience with these spreader feed systems, you may be having a difficult time selecting which system best fits your snow and ice management needs. BOSS offers a pintle or auger feed system on the VBX and FORGE line of spreaders. There are some key differences between the two feed systems that are important to understand.

In general, in the United States, auger feed systems tend to be more popular in the Midwest and Ohio Valley areas. Pintle chains are the preferred feed system in the New England region. It’s hard to say why but perhaps familiarity with previous v-box hopper spreading systems or agricultural products has led to the regional spreader feed system preferences.

Among the auger’s greatest advantages over the pintle system is that it has fewer moving parts and no chains to maintain. It has a simple steel auger with flighting that “pulls” the salt and sand material towards the discharge chute. The even pulling of the material by the auger allows the auger feed system to have a more “even” flow of material, and as a result, the spread pattern coming off the spreader tends to be more even than it does with a pintle chain system.The pintle chain system utilizes a flat, 12” wide (BOSS) pintle chain which basically acts like a conveyor belt feeding material from the hopper to the discharge chute and spinner assembly. The large surface area of the pintle chain allows the system to carry more material to the discharge chute than the auger, especially when set at “Max Flow” settings.In order to lessen the weight load of the material on the auger, most auger hoppers utilize inverted “v” baffles. These baffles help to control the weight and flow of the material onto the auger. If the weight on the auger is too great at startup – the motor could get damaged. Many pintle chain systems also use inverted v baffles as well – although they may not be always be needed with this feed system.Because the pintle chain system is metallic and exposed to highly corrosive materials like salt, the need for maintaining the chain links, etc, is greater than it is for the auger feed system.A tradeoff for the even flow of material that an auger system provides compared to a pintle system, is less material feed capability. In other words, if you set both systems at “max” flow output, the pintle system will have the ability to spread significantly more material than the auger system. Carefully consider the specifications of each before purchasing. For instance, the difference between the BOSS Snowplow feed systems:

Material Flow
The auger system also has the capability to break up chunks of salt and sand that sometimes form inside the hopper – the auger can in fact “crush” those clumps and allow them to be processed and spread. Many of the auger spreaders, have a feature that protects the auger motor from being overloaded by materials that jam the auger. The system will sense the jam and cause the auger to move in reverse and forward a couple of times in an effort to clear the jam. If the object is not cleared – the controller will indicate a jam has occurred, allowing the operator to clear the jam and save the auger motor from serious damage.Most auger system v-box spreaders utilize vibrators to keep the material in the hopper loose enough to flow to the feed system. However, even the best vibration system in the world cannot overcome material which has frozen into a solid clump because of moisture or water intrusion. It is very important for the operator of the spreader to try to keep the spreading material as dry as possible, and ideally, not allow a filled hopper to sit for extended periods of time in very cold weather as “bridging” can occur. Bridging happens when the material freezes into a solid mass, no longer flowing into the feed system, creating a solid “bridge” of material over the top of the feed system much like a bridge over a flowing river.