Improve Your Back Drag Ability with BOSS D-Force 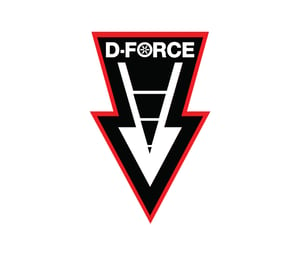 Keep your blade in contact with the pavement with D-Force. D-Force improves scraping performance while backdragging by maintaining a consistent hydraulic downforce powered by a hydraulic accumulator. Available as an option on new truck plow purchases, this option allows the user to maintain constant hydraulic down force to improve scraping performance while backdragging. D-Force will be available for all new straight-blade truck plows and 8'2" and 9'2" DXT v-plows (excludes EXT, Trip-Edge, XT, HTX v-plows and Heavy-Duty plows) and will not be retrofittable to existing plows.

Operation of D-Force is made simple. Simply pull up to an area for backdragging, put the plow in float mode (either by pressing and holding the down function for 2 seconds or via double tapping of the down function) so the Red LED is displayed on the controller. Double tap the down function a second time to activate D-Force. The controller LED will switch to an Orange color and the power unit will run for a short duration, applying down force to the cutting edge through the lift cylinder. If necessary, double-tapping a second time will run the power unit again. Please note, BOSS recommends using D-Force in backdragging motions only. D-Force is not intended for forward travel.

D-Force utilizes the SmartHitch circuit to apply hydraulic down force to the cutting edge. When D-Force is activated, the SmartHitch valve locks and the power unit runs, allowing pressure to increase within the lift and lower hydraulic circuits, creating down force. While the power unit runs, the accumulator fills with fluid. When 1200 PSI is reached, fluid begins to dump over the D-Force relief valve. While plowing, the vehicle and plow will eventually encounter uneven terrain and obstacles. When the cutting edge is forced upward, any pressure over 1200 PSI will dump over relief. When the cutting edge travels downward, the reserved pressure in the accumulator will maintain added fluid pressure in the cylinder and allow the plow to maintain down force with the plowing surface. The accumulator allows approximately 2 inches of cylinder travel while maintaining down force.

D-Force is a patented system. The use of an accumulator and the ability to maintain down force over uneven terrain is unique to the BOSS system. Users can still angle the blade while D-Force is activated, allowing built up snow to be windrowed to one side while backdragging. Additionally, BOSS' release of Back Drag Edges makes a great complimentary accessory to D-Force. The scraping performance is enhanced even more when a Back Drag edge is coupled with D-Force. Adding D-Force to your fleet will increase productivity by allowing single pass scrapes and saving valuable time.

Click the link below to see D-Force in action!