Michael started plowing when he was in high school and has been plowing for 16 years. He now owns and operates Liberty Outdoor Services with his wife, Breanna, based out of Milwaukee, Wisconsin. Snow removal runs in the Berg family and he credits his beginnings in the snow business to his father. He’s grown 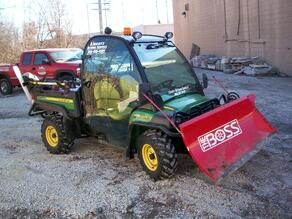 up around snowplows and says, “I’ve always plowed.”

Michael plows on average 50 inches per year and around 15-25 events, with 25 being a busy winter last season. He’s responsible for both commercial and residential accounts and performs sidewalk snow removal. He utilizes both of his BOSS dealers, Proven Power, where he purchased his UTV plow and Snowplow Solutions for all snow & ice removal equipment needs.

Believe it or not, Michael hasn’t always been a BOSS owner. Before buying his first UTV BOSS v-plow, Michael grew up running another “red” plow. That all changed when he started looking for a v-plow for his Gator. While he was searching, he came to realize that finding a v-plow for a UTV proved difficult. He continued his search until one day he discovered the BOSS 6’6” V-plow for UTV’s, which his wife now operates. Since then, he and Breanna have never looked back. Michael has been a BOSS owner for three years now and has gone on to purchase a 9’2” V-plow and an 8’ straight blade. He says his favorite feature of his plow is “the v-plow capabilities, you just can’t beat it.”

Since then Michael has put his snow plow to the test. He recalls a particularly nasty storm where it dumped 2 feet of snow onto Milwaukee and consisted of drifting snow and below zero temperatures. He explains that all he had to do was put his plow in the v position and bust through all the drifts. He recalls another day on the job when he was out plowing with a front end loader. All was going smoothly until he hit something strange in the bank of snow. Before he knew it, he was lifting a motorcycle out of the bank with his front end loader. Talk about a hidden obstacle!

Michael has learned a great deal over the years and one of those lessons is staying warm in the sometimes extreme winter weather.  When using a UTV or skid steer for snow removal, he noted that the best way to stay warm during an event is to make sure you have a heated cab. Aside from that, Michael advises to dress in a full set of Carharts.

Thank you to Michael Berg for being a BOSS owner and sharing his BOSS story! If you are a BOSS Owner and would like to be featured on our "Like a BOSS" blog stream, submit the form below and you will be contacted to share your story!