Prepping Your Box Plow for the Winter Season 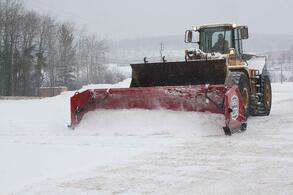 The time has come for the snow to flurry and the plows to come out. But before you do, there are a few steps to take to get your box plow ready to attach to your snow removal equipment.

Use this inspection checklist to prepare your box plow for the first push this coming season:

____ Inspect all bolts and fasteners

____ Inspect all welds in plow structure

____ Tighten the trip springs. You’ll want to tighten them until you can slide a business card between the coils

____ Inspect the plow shoes and cutting edge. Replace if necessary

____ Most importantly, grease the hitch of your box plow

____ Just like a truck plow, you should have an emergency parts kit handy. This should include a spare chain, binder and extra trip return springs

____ Perform a walk around of the machine you plan to operate throughout the winter months. Check for any leaks and the air pressure of the tires

____If you hadn’t done so before you put your plow away last season, now would be a good time to touch up any areas of chipped or worn paint on the plow to prevent any further wear or rust.

Winter is here, so get the plow out, get ready for the next storm and push that snow!