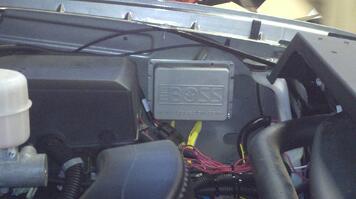 You may have heard that BOSS has introduced a new, optional wireless electrical system. Along with that introduction, we have also released a new pistol grip controller  that is tethered to the truck for safety. Because Next Generation Electrical system, or NGE, is a new electrical system, there are some new terms you should probably be familiar with.  The NGE wireless system offers you a new way to communicate with your plow and some of the terms you may have previously been familiar with are used a little differently when discussing NGE. Use this glossary to learn how the Next Generation Electrical System has changed compared to our wired communication system.

Configuration Mode: Mode in the Pistol Grip Controller that allows you to customize certain pre-set factory settings on your snowplow, including Rapid Up and Sleep Mode.  Control Kit: This contains all the electrical components for the NGE system – Vehicle Control Module (VCM), Plow Control Module (PCM), power/ground cables, solenoid, battery cable, controller and all mounting hardware.

Plow Control Module (PCM):  Located in the coupler, it controls all the functions of the plow and plow headlights.

Rapid Up: Customizable feature with the Pistol Grip Controller and NGE system that allows you to quickly lift the blade all the way up by tapping the up button on the controller twice. You can choose to either leave Rapid Up on, or you have the option to disable it.

Solenoid: On our previous control systems, the solenoid was mounted under the hood of the truck, with the NGE system it is now located in the plow coupler, and when signaled by the PCM, sends 12V battery power to the power unit on the plow.

Sleep Mode: Sleep mode is a power saving feature on the controller. The controller will turn itself off after a customizable duration of inactivity. The preset factory time-out amount is 20 minutes, however, you have the option to change that to 15, 10 or 5 minutes.

Straight Blade Mode: Mode in which the controller functions specifically for straight blades. If you find that you need to hook up to a v-blade that has been wired with the NGE system, all it takes is switching the controller bezel to v-blade, changing the PCM to v-blade mode, and syncing the truck to the new plow.

Sync Mode: Since NGE is a wireless system, you will have to sync plow and truck upon initial install or if you wish to switch different plows between trucks. Sync mode is used to establish communication between vehicle and plow. After syncing plow to truck, you establish a unique communication channel so there won’t be any disruption if you have multiple plows with NGE working together.

Tethered Control: The NGE system is wireless in communication, but the controller is wired to the truck and won’t be active unless plugged in to prevent potential accidents that could occur outside of the truck. For instance, if someone puts the controller into their pocket and then steps out of the truck to inspect the plow or lean over it, the controller won’t accidently activate and then drop onto someone’s foot or move unexpectedly.

Vehicle Control Module (VCM): Mounted under the hood of the truck, it receives commands from hand control and sends them wirelessly to the PCM and senses whether the plow is connected and power either plow headlights or vehicle lights.Terms that have previously been used for the wired control system now have a slightly different connotation when discussing the NGE system. Use this as a reference if you ever need clarification while using the Next Generation Electrical system. Also, contact BOSS if you have any questions - www.bossplow.com