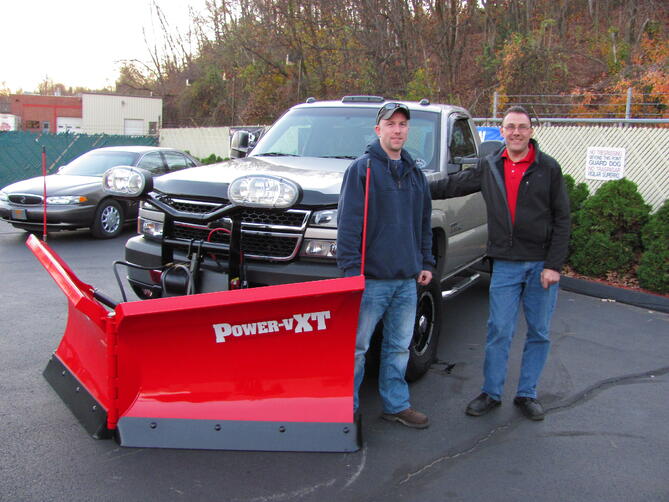 Full-time firefighter and part-time snow removal contractor, Connor Hedge, 24, of Westfield, Mass., is the proud owner of a new Power-V XT Snowplow, one of two Grand Prizes in the Heavy Metal Sweepstakes sponsored by THE BOSS Snowplow and Gravely® in September. The snowplow was recently installed by THE BOSS distributor Ken’s Auto Sales, 921 Main St., Holyoke, Mass.

“I’ve been wanting a BOSS V-plow for a long time, so when I learned that I won it was a tremendous thrill and surprise for me,” said Hedge, who is a paramedic and firefighter with the Westfield Fire Department.  Hedge operates a part-time snow removal contracting business and he said his new BOSS Power-V XT will enhance his productivity to help him get the job done faster when servicing his local accounts. “I’ve always been impressed with THE BOSS’ reputation for quality and durability, so this plow is a welcome addition.”

Hedge was one of more than 8,000 participants in the raffle-style Heavy Metal Sweepstakes, which invited current and new BOSS and Gravely Facebook fans to play online and receive daily tokens to bid on popular gear and valuable prizes, including a Gravely Pro-Turn mower, the second Grand Prize in the sweepstakes. Players who “Liked” the page received a new token each day and earned bonus entries for inviting a Facebook friend to play. Prize winners in the sweepstakes were determined through a random drawing at the end of the promotional period.

During the sweepstakes period, the game generated nearly 232,500 bids and more than 4,500 new “Likes” for THE BOSS Snowplow Facebook page, helping BOSS surpass its goal of reaching 10,000 fans.

“We’re excited about the tremendous response to our Heavy Metal Sweepstakes and pleased that our plow winner, Connor Hedge, will be able to put his prize to good use,” said Mark Klossner, marketing director for THE BOSS Snowplow. “Our goal with this promotion was to really engage our fans and find a fun and entertaining way to reward them for playing.  We think we’ve succeeded, as participation in the Heavy Metal Sweepstakes exceeded our expectations.”

Open to legal residents of the 50 United States (except Hawaii and D.C.) and residents of Canada (excluding Quebec) 18 years of age or older, the Heavy Metal Sweepstakes kicked off Sept. 1 and concluded Sept. 30.